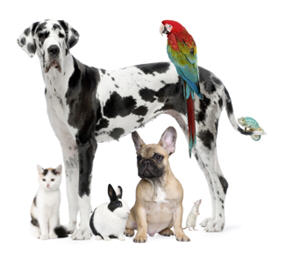 Sometimes I think we underestimate the educational wealth to be gained from our pets. Case in point: If you viewed the world the way your cat does, you’d find it a lot easier to respond to barbs and insults with a casual eyebrow-lift and a wide yawn. You might inadvertently expose your claws as you stretched before rolling over, but it wouldn’t really mean anything beyond extreme boredom.

If you viewed the world the way your dog does, you’d see only the good in people and you’d go into every relationship expecting the best. The question, “What am I, chopped liver?” would mean nothing to you, you LOVE chopped liver. It’s your favorite thing. You’d appreciate all the little things people do for you, and even if they gave you leftovers you’d wag your tail and make them feel as though they’d given you the moon.

You never see a pet Iguana blinking at adversity, and fish don’t waste effort worrying about things that may or may not happen. It’s pretty much “just keep swimming” for them, and “living in a fishbowl” isn’t a reason to have a nervous breakdown.

But apparently, having a pet isn’t just an exercise in uncovering life’s little lessons. According to researchers, animals return very real physical and mental health gifts to their human companions. Hence the focus on Animal Assisted Therapy by psychiatrists, hospitals, therapists and other health professionals.

Does your genetic imprint leave you with an elevated risk for heart attacks? Studies such as one undertaken by Australia’s Baker Medical Research Institute find that having a pet lowers blood pressure and cholesterol levels by a degree equal to that of typically recommended dietary changes.

Suffering from depression? Recovering from surgery or heart attack? Animals can help you return to normal measureably sooner.

Are you close to a child who may be experiencing some form of abuse or neglect in the home? Researchers find that a relationship with a family pet can ameliorate some of the attachment insecurities and other deficiencies such children develop. Even if you can’t introduce a pet into the home, occasional visits with an animal can be helpful, especially when an accompanying adult can explain the right treatment of the pet to the child.

Considering all the benefits to be gained from pet companionship, perhaps there are ways we can repay our four-footed (or no-footed) friends. If nothing comes to mind immediately, you might check out this post by my friend Lisa McGlaun on Life Prints. As Victor Hugo suggested, we may have more to gain from pet relationships than research has yet upturned.

“From the oyster to the eagle, from the swine to the tiger,” he wrote, “all animals are to be found in men and each of them exists in some man, sometimes several at the time. Animals are nothing but the portrayal of our virtues and vices made manifest to our eyes, the visible reflections of our souls.”